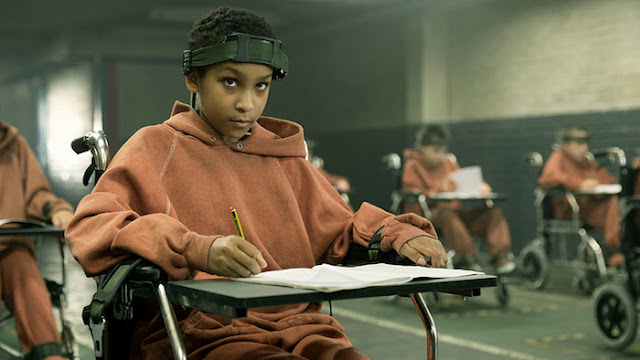 Most of us don’t expect to turn on a zombie movie and find Glenn Close, and that fact alone is enough to set Colm McCarthy’s The Girl with All the Gifts apart from the shambling undead herd. The film looks solid—including this new trailer—but it’s received rave reviews, even from non-horror folks, since it made the rounds on the festival circuit. I was intrigued before, but all of these combined factors certainly piqued my interest.

There’s a definite familiarity to The Girl with All the Gifts—one of the pull quotes in this trailer points out the obvious lineage from Danny Boyle’s 28 Days Later, which isn’t necessarily a bad thing, now is it? We see elements of outbreak stories, post-apocalyptic traits, and last-hope-for-humanity yarns.

It’s an interesting combination to be sure, and if handled the right way, could easily be something special. As that’s the word on the street, I definitely hope it delivers on the promise.

Mike “M.R.” Carey is more known for his work on countless comic book titles, but The Girl with All the Gifts is based on his best-selling novel of the same name. He also handled adapting the screenplay, so if anyone has a handle on how to translate the material from page to screen, it’s probably him.

The near future; humanity has been all but destroyed by a mutated fungal disease that eradicates free will and turns its victims into flesh-eating “hungries.” Only a small group of children seem immune to its effects.

At an army base in rural England, this group of unique children are being studied, subjected to cruel experiments by biologist Dr. Caldwell. Despite having been infected with the zombie pathogen that has decimated the world, these children retain normal thoughts and emotions. And while still being subject to the craving for human flesh that marks the disease these second- generation “hungries” are able to think and feel making them a vital resource in the search for a cure.

The children attend school lessons daily, guarded by the ever watchful Sergeant Parks. But one little girl, Melanie, stands out from the rest. Melanie is special. She excels in the classroom, is inquisitive, imaginative and loves her favorite teacher Miss Justineau.

When the base falls, Melanie escapes along with Miss Justineau, Sergeant Parks and Dr. Caldwell. Against the backdrop of a blighted Britain, Melanie must discover what she is and ultimately decide both her own future and that of the human race.

In addition to Glenn Close, The Girl with All the Gifts also stars Paddy Considine and Gemma Arterton, along with newcomer Sennia Nanua, who plays Melanie. It’s a strong cast, a fantastic trailer, and as we look to slog through the tedious minefield of January and February, it’s one potential bright spot to keep an eye on.

The Girl with All the Gifts becomes available on DirecTV on January 26 and hits a limited number of theaters and VOD on February 24. Anyone with DirecTV want to invite me over on January 26?
Posted by Brent McKnight at 9:08 AM