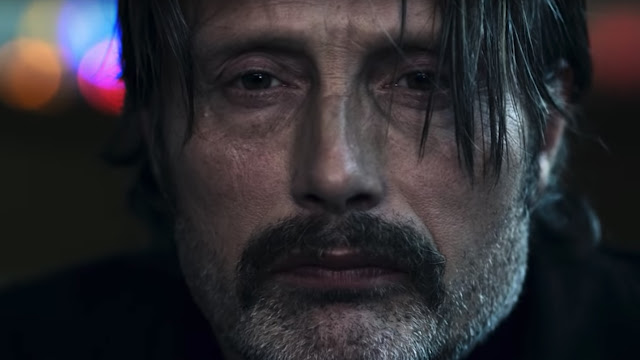 Uh, one-eyed Mads Mikkelsen playing a former assassin named “The Black Kaiser,” doing his best over-the-top John Wick impersonation in a snow-covered wilderness? Yes, yes, a thousand times yes. This trailer for Netflix’s upcoming Polar is extremely my speed. Check it out below and mark January 25 on your calendars.

Sure, the prospect of a retired badass, sick of killing, finally out of the game, trying to live out his last days in secluded peace, only to be reluctantly dragged back in by the scruff of his neck (or a connection to a fellow outsider now in danger thanks to being friends with our protagonist), isn’t exactly new. Think John Wick, The Equalizer, and Taken to name a few recent offerings—but there are countless examples throughout movie history. I know you can think of at least a few favorites.

This is a familiar trope, but there’s a reason it’s so prevalent, because it’s awesome, and Polar looks super rad. Based on a comic I’ve never heard of, that’s readily apparent in the cartoonish nature and general craziness—the side characters and insane weapons all look especially toony. Maybe this will work, maybe it won’t, but what the hell, if Mads Mikkelsen wants to become the latest silver fox movie badass, I am as on board as a person can possibly be.

The world’s top assassin, Duncan Vizla, aka The Black Kaiser (Mads Mikkelsen), is settling into retirement when his former employer marks him as a liability to the firm. Against his will, he finds himself back in the game going head to head with an army of younger, faster, ruthless killers who will stop at nothing to have him silenced.