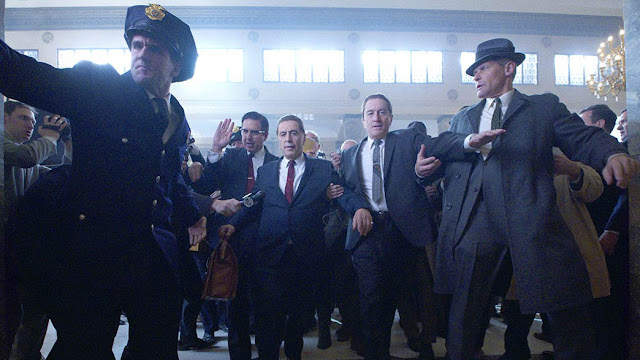 A new Martin Scorsese movie is always a reason to celebrate, so let’s party like maniacs with the first trailer for his long-in-the-works crime opus, The Irishman.

How badly does Netflix want to be taken seriously as an awards contender? If backing Alfonso Cuaron’s Roma last year didn’t tip you off, spending $200 million to let one of cinema’s greatest figures finally tell the tale he’s been trying to tell for years—and bankrolling the digital de-aging of some of his favorite actors to do it—should indicate where they stand.

Based on the book I Heard You Paint Houses by Charles Brandt—a code phrase used by hitmen—The Irishman tells the story of Frank Sheeran. A World War II vet, he was a player alongside some of the most notorious criminals and gangsters of the 20th Century. This includes possibly being involved in the disappearance of Jimmy Hoffa, as illustrated by this trailer.

Basically, Sheeran had a unique vantage point for the post-war era and was privy to the intricacies of organized crime. If nothing else, this should allow Scorsese a way to sweep through modern history as the central figure’s career spanned decades that shaped the world.

The Irishman stars Scorsese fave Robert De Niro as Sheeran, the duo working together for the first time since Casino. Joe Pesci also makes a return to the movies after retiring a few years back—if anyone is going to pull you out of retirement, Scorsese’s probably one who can do it. This also marks the first time Scorsese and Al Pacino have worked together—which sounds so wrong for some reason—and sees the actor put his spin on Hoffa.

And because the story spans such a large era, and the main trio is getting up in age, The Irishman uses special effects to take off the years. That’s always a dicey proposition, though it worked well with Samuel L. Jackson in Captain Marvel, but it’s hard to tell in a trailer, so we’ll have to wait and see on that front.

As you might imagine, being a Martin Scorsese movie and all, The Irishman also put together one hell of a supporting cast. Outside of the big three, it also stars Harvey Keitel, Anna Paquin, Jesse Plemons, Ray Romano, Stephen Graham, Jack Huston, and Bobby Cannavale, among others.

The Irishman premieres at the New York Film Festival on September 27 and Netflix will reportedly give it a wide theatrical release later in the year, probably coinciding with award season. Since the streaming giant continues to butt heads with theater chains over the release window, it’ll be curious to see how that plays out and when it will hit the digital platform.
Posted by Brent McKnight at 8:24 AM