Jakob’s Wife has it all. Barbara Crampton. Larry Fessenden. Priests. Vampires. Rats. Splatter. The line, “I’m going to tongue fuck a hole in your neck until I puke blood.” Concrete Blonde. You know, all the best horror things. A bloody, energetic genre throwback, the latest from Travis Stevens (The Girl on the Third Floor) mixes in humor amongst the body bags and the result is a damn fine time.

Married to Jakob (Fessenden), a small town minister, Anne (Crampton) lives a classic life of quiet desperation. When an old flame, played Robert Rusler (Hook from Thrashin’), returns to town, a momentary dalliance leads to an encounter with “The Master,” an ancient vampire. On the other side, Anne emerges with a fresh sense of life, purpose, and power that does not jibe with her previous existence. As one might assume, complications arise. Gooey, gooey complications as corpses pile up and her marriage experiences much unanticipated turbulence.

[Related Reading: 'You're Next' Movie Review] 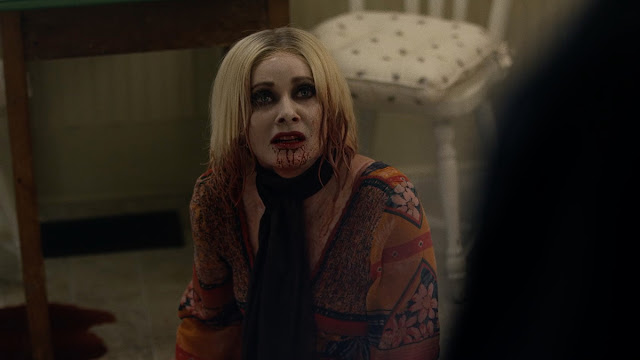 From the title and set up, it’s readily apparent what the film has on it’s mind. While once she dreamed of globetrotting adventure, Anne has continually been pushed further and further into the background, quite literally becoming little more than Jakob’s wife. He talks over her, no one listens to what she has to say, and people generally act as if she’s not there, as if she’s of no consequence.

As Anne exerts her newfound will, refusing to be brushed aside any longer—and, you know, drinking blood all the while—the script from Stevens, Kathy Charles (Castle Freak), and Mark Steensland, toys with themes of liberation, identity, how we define ourselves, choosing the life we want, and more. Though grand ambitions, Jakob’s Wife doesn’t do much more than present these ideas, never truly exploring them or fleshing them out in any deeper way. 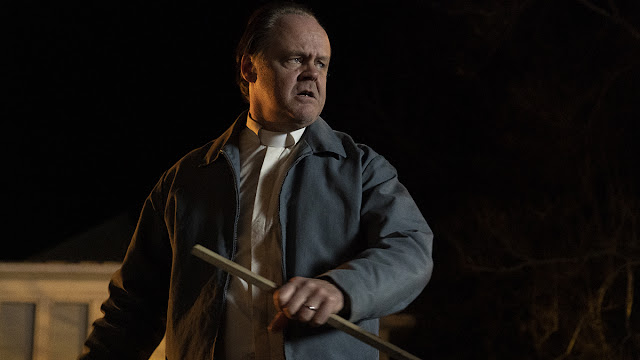 Though it misses some thematic opportunities, Jakob’s Wife lands damn near everything else. Geysers of blood erupt throughout, the design of The Master hearkens back to the likes of Salem’s Lot, and while the humor distracts from the more somber elements, it’s really, really funny. There are moments throughout that will have horror fans laughing and clapping with glee.

Most of the film hinges on Crampton and Fessenden, and the two horror legends are more than up to the task. Crampton shines as the long-suffering, oft-neglected wife—the character may fade into the background of her life, but she never does. And when she explodes out of her shell, Crampton sinks her teeth, both literally and metaphorically, into the part, sipping blood from a wine glass and refusing to be overlooked.

[Related Reading: 'The Girl on the Third Floor' Movie Review] 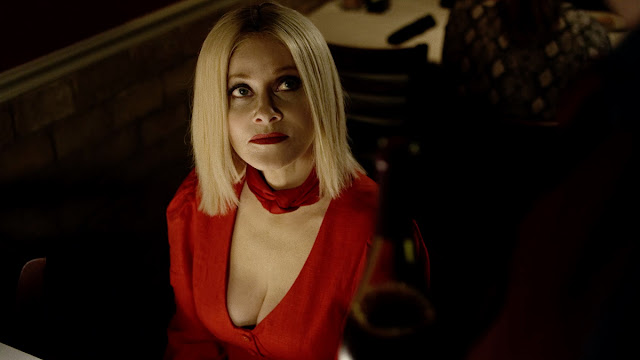 The two leads have incredible chemistry, and while Jakob could easily have become a stock neglectful husband, Fessenden imbues him with more texture and complexity. He never wanted their relationship to get this way, he never intentionally sought to sideline Anne, it was a long, gradual slide into traditional gender roles and norms that no one thought to question. Though he certainly has conflicted feelings about helping his wife hide bodies and clean up her very messy messes, he sticks to his wedding vows, playing the dutiful husband. And along the way, they rekindle their passion not only for life, but for one another, which is where the true heart of the film lies.

At times Jakob’s Wife feels like a newly discovered artifact, a forgotten gem unearthed in a dusty warehouse and unleashed anew on horror fans. Engaging and briskly paced end to end, this is an absorbing, entertaining-as-hell vampire yarn with a sweet relationship and two terrific key performances at its core. You won’t have more fun with a movie anytime soon. [Grade: B+]