The First 'Assassin's Creed' Trailer Is Pretty But Strange 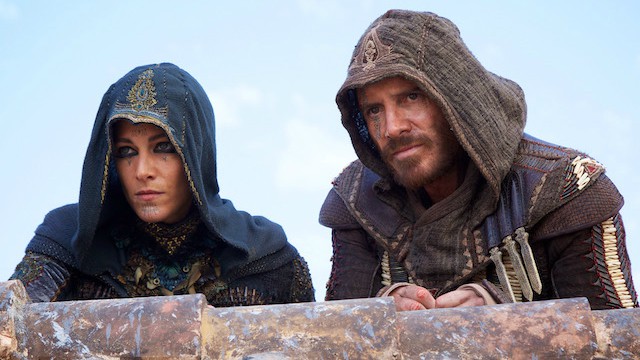 Movies based on videogames are, as a whole, not very good. But the upcoming Assassin’s Creed adaptation just dropped its first trailer, and it looks weird as shit. Check it out below.

Dubious Kanye song aside, this Assassin’s Creed trailer actually looks rad. Not to mention strange. And I mean both good strange and bad strange.

What we see here is beautiful, and the mix of shadowy dystopia and old-timey period piece is undeniably cool. The action looks nice, and with Justin Kurzel at the helm—and reteaming with his Macbeth lead Michael Fassbender—there is all the potential in the world here. If nothing else, this is going to be a gorgeous movie to look at.

That said, Marion Cotillard, another Macbeth alum and usual all-star, delivers all of her lines with an awkward stiltedness (and that “Welcome to the Spanish Inquisition” line feels lifted straight from Monty Python). But that could very well be an aesthetic choice—I know nothing about the games, is she a robot or something?

This trailer stops with the plot part of the way through—apparently Michael Fassbender goes back in time to get badass lessons from an ancestor, or something. But when you’ve got fancy ancient parkour, you want to show that off, and that’s probably a big hook for the videogame set.

So far, though, Assassin’s Creed looks promising. I’m curious to see how it turns out, though. 20th Century Fox must have loads of confidence in the project. It reportedly cost somewhere between $150 and $200 million just to produce, and it has a prime release slot on December 21, where it will throw down with intense box office competition. It drops the same day as the Jennifer Lawrence/Chris Pratt-fronted sci-fi joint Passengers, and just a week after Rogue One: A Star Wars Story. The holiday box office is going to be interesting to keep an eye on.
Posted by Brent McKnight at 8:56 AM