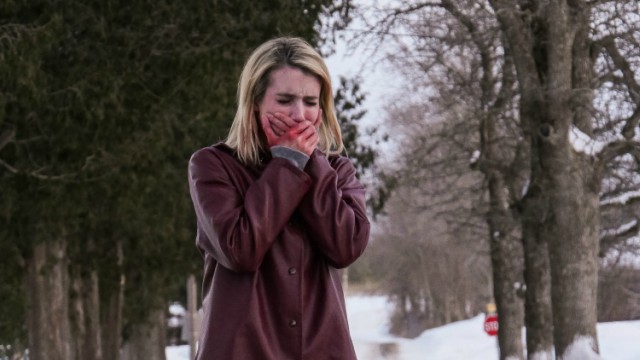 There are things that writer/director Oz Perkins’ (who acted in one of my all-time favorites, Not Another Teen Movie) horror thriller, The Blackcoat’s Daughter, does well. And things it does not.

Formerly titled February, it sets the mood with grim aplomb, creating an atmosphere of tense dread, like a non-supernatural Lovecraft with discordant Hitchcockian strings. Foreshadowing, however, is not a strong suit. Roughly a third of the way through this tale of two young women stranded alone at a remote boarding school, I sat back and said, “Oh, that’s what’s going on,” and sure enough, that’s exactly what the deal was. It's easy to see what's coming at every turn.

Though the outcome is obvious, and the violence doesn’t sneak up, Perkins manages to make it jarring. Solid performances from Emma Roberts, Kiernan Shipka, Lucy Boynton, and James Remar help make The Blackcoat’s Daughter a moderately interesting watch at SIFF, though the predictability hinders the enjoyment and keeps it from realizing its full potential. [Grade: C+]

Posted by Brent McKnight at 2:41 PM