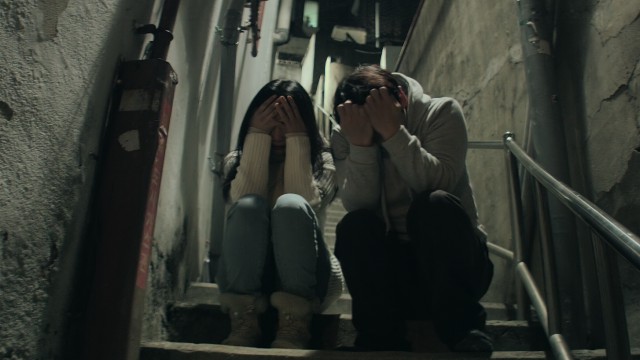 When a photographer witnesses a horrendous crime on the rooftop of a nearby building, he attempts to take a picture of the event. The assailants see him, hunt him down, and bludgeon him do death with a hammer in his own low-rent studio. And that’s just the jumping off point for South Korean director Park Hong-min’s (A Fish) twisted, nightmarish thriller, Alone, which makes its North American debut at the Seattle International Film Festival.

After Su-min (newcomer Lee Ju-won) is apparently murdered by men in ski masks, he wakes up, naked, alone, and unharmed in the middle of his gritty Seoul shantytown. He wanders through the snaking, labyrinthine stairways, paths, and alleys; encounters a crying child armed with a knife and a weeping woman; and scurries through the crumbling slum until he gets home. Where hit attackers find him. And kill him. Again. And the situation repeats itself, shifting and morphing, each episode more surreal than the last.

Caught in an endless purgatory of violence, Park uses this fragmented structure to dole out bits and pieces of information about Su-min and his past, gradually letting the viewer in on the mystery. Alone opens on a collage of photos that replicates the view from Su-min’s apartment, and this narrative approach provides a similar mosaic effect. Over time, these peeks and glimpses come together to form a larger picture of the protagonist’s fractious mental state, which resembles and reflects his decaying surroundings. 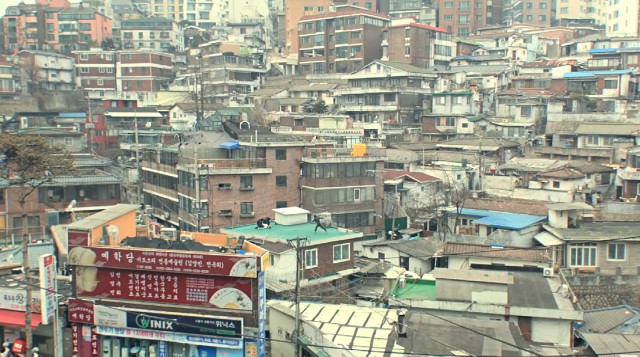 Park’s visual approach enhances the dreamy, maze-like internal logic. Long tracking and following shots pursue Su-min through the disorienting, claustrophobic streets and passageways. These lingering, sustained takes, elaborately choreographed through the tangled urban corridors, unfold like less ostentatious versions of what Alejandro Gonzalez Inarritu does in Birdman and The Revenant. Though Park is clearly strong behind the camera, he never allows the stamp of ego never comes to the forefront.

The cinematography and staging are spectacular, ramping up the fuzzy ambiguous feel, but the filmmaker rarely calls attention to them. This includes one extended sequence where Su-min appears trapped in an M.C. Escher painting come to life, endlessly climbing one stairway-to-nowhere after another, reappearing on the other side of the frame, never reaching any destination or goal.

Throughout Alone, the camera remains at eye level, which places the viewer in the scene with an unsettling closeness. We’re a fly on the wall—so near we’re almost a participant—bearing witness to intimate events we have no business seeing. As the frame follows Su-min, so do we, and this perspective generates another intentionally disorienting sensation, dragging the audience into an uneasy state of complicity and compliance. Su-min descends into paranoia and mania, and though it feels like we may be able to reach out and stop it, all we can do is watch. 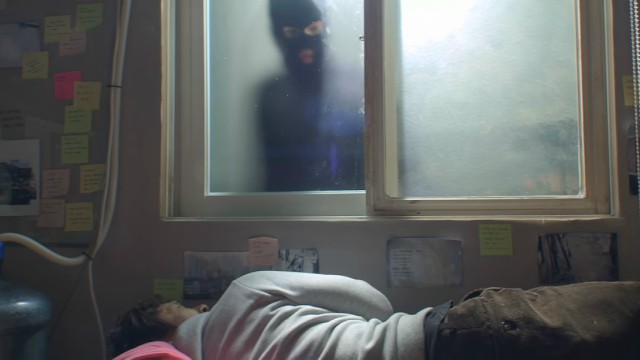 Set entirely in one slum, in a space of a few square blocks, Alone has a grandeur and scope that belies this limited, contained venue. A subtle, but poignant, examination of class, inequality, and impending gentrification flows below the surface, illustrated in every dingy, cramped structure; dark, desolate staircase; and Lee Joo-won’s strong lead performance.

At times the extended shots dawdle a bit too long in moments that could otherwise have been tightened up in editing. But these are negligible missteps, and provide space to take in and ponder the heady, intrepid surrounding text. A daring narrative construction and a singular visual film, Alone stands as a unique psychological thriller, full of intricate themes, and in just two directorial efforts, Park Hong-min has established himself as a powerful filmmaker. [Grade: A-]